The Wolf and the Woodsman by Ava Reid | Book review 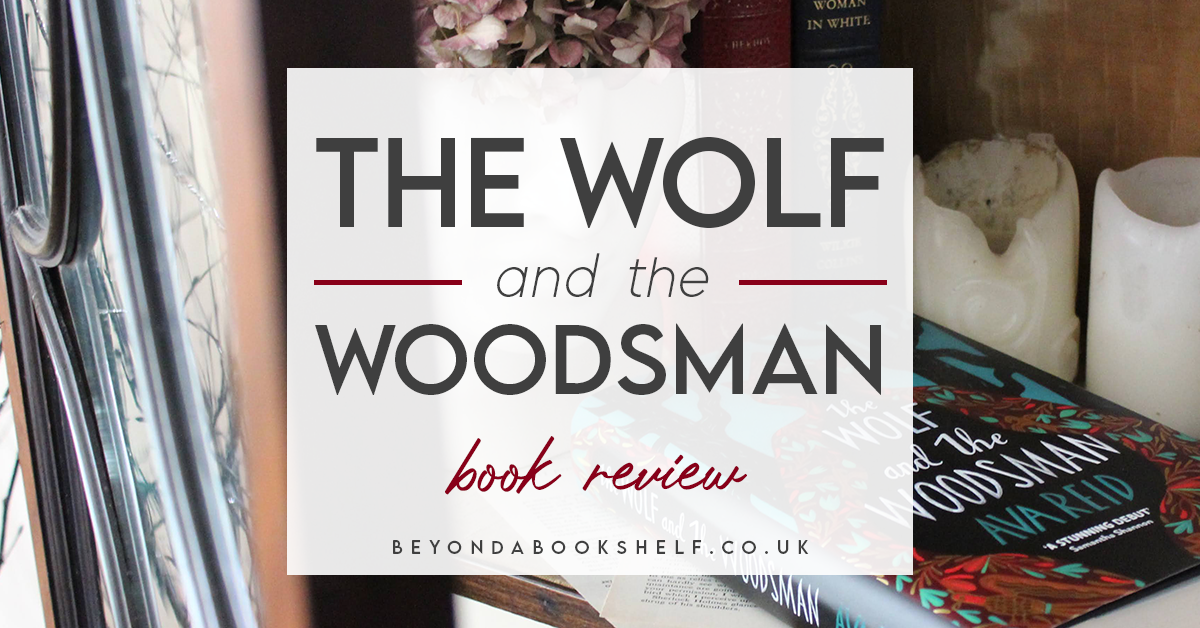 The Wolf and the Woodsman by Ava Reid

In her forest-veiled pagan village, Évike is the only woman without power, making her an outcast clearly abandoned by the gods. The villagers blame her corrupted bloodline—her father was a Yehuli man, one of the much-loathed servants of the fanatical king. When soldiers arrive from the Holy Order of Woodsmen to claim a pagan girl for the king’s blood sacrifice, Évike is betrayed by her fellow villagers and surrendered.

But when monsters attack the Woodsmen and their captive en route, slaughtering everyone but Évike and the cold, one-eyed captain, they have no choice but to rely on each other. Except he’s no ordinary Woodsman—he’s the disgraced prince, Gáspár Bárány, whose father needs pagan magic to consolidate his power. Gáspár fears that his cruelly zealous brother plans to seize the throne and instigate a violent reign that would damn the pagans and the Yehuli alike. As the son of a reviled foreign queen, Gáspár understands what it’s like to be an outcast, and he and Évike make a tenuous pact to stop his brother.

As their mission takes them from the bitter northern tundra to the smog-choked capital, their mutual loathing slowly turns to affection, bound by a shared history of alienation and oppression. However, trust can easily turn to betrayal, and as Évike reconnects with her estranged father and discovers her own hidden magic, she and Gáspár need to decide whose side they’re on, and what they’re willing to give up for a nation that never cared for them at all.

READ AN EXCERPT OF THE FIRST CHAPTER HERE

There are two woodsy novels out in June both with “wolf” in the title that I’m very excited for: The Wolf and the Woodsman by Ava Reid (which I’m talking about here) and For The Wolf by Hannah Whitten. I’ve seen people conflate the two, but frankly, besides the fact they both have somewhat woodsy settings and dark & brooding love interests, they’re very different books.

The Wolf and the Woodsman‘s structure: a well-formed standalone

The Wolf and the Woodsman is a very different novel from what I anticipated based upon the notions inspired by the blurb I had going in. It starts out rather like Uprooted, with a village girl offered up to a ‘big bad’ (in the case of TWATW, the Woodsmen) so that the village can continue living in peace.

It then turns into a quest narrative that continues through for the first 50%, then it turns somewhat into a court politics narrative for another 30%, and then another quest narrative for 10%, and then back to a final bit of court politics and a nice climactic conflict. It’s the kind of arc that usually happens across two or three books in a series (you know, the first book is a quest and the second is court politics and then the third is an epic and climactic battle), but Reid has condensed them down into one book and the story benefits from it.

Though I felt the book was formed by two distinctly separate halves, as a standalone it worked well. Sometimes I see stories that have been dragged out over-long, and I’m glad The Wolf and The Woodsman is neatly all in one. I’m also a sucker for a well-formed standalone, so whenever I read one done well I’m rather biased.

That said, I wonder if the structure of the story could’ve been rearranged so the first half doesn’t seem slightly pointless – in the first half the heroine, Évike, and the Woodsman, Gáspár, go on a quest to find the mythical turul (a mythological bird of prey from Hungarian tradition), only to turn back after being discouraged. This then leads into the courtly politics part of the narrative. And then, after a certain event, they leave the castle and set off once again, going back to the same place, to find the turul.

It seemed rather back-and-forth and the first half seemed a bit pointless as they went all that way to not get the turul, only to end up going back later on anyway to actually get it this time. Bad explanation time, but it’s as if I went to the supermarket, looked at the chocolate aisle, was discouraged from buying chocolate and left. Then once at home I decided actually I did need chocolate and so I left and made the trip all the way back to the supermarket to get it. I feel it would’ve made more sense if Évike and Gáspár travelled to find something else in the first half only to realise it wouldn’t have worked out, and then later on made a separate journey to find the turul – upon research helping them see that it’s actually the turul that will help them.

I’ve also seen the book described as slow-burn, and I think this shows that slow-burn is a description that varies by reader definitions. I felt the romance between Évike and Gáspár came on quite quickly; both of them were attracted to each other from early on and Évike imminently starts having some rather lusty thoughts (and Gáspár, too, but as he’s not the narrator you wouldn’t know at first). By halfway through, they’ve kissed.

For me, slow-burn is an extremely drawn-out process of attraction (that includes intense reader frustration and much in-book yearning) and only ends with a romantic resolution of some kind towards the final quarter. As a result, for me this book wasn’t a slow burn solely due to the fact both Évike & Gáspár were open with their desire for each other from early on, but I think it did have an excellent romance.

As a reader, I felt the romance was one of the strongest aspects of this book and Reid writes extremely good intimate scenes (of both the sexual and non-sexual kind, but the sexier scenes in this book are just *chefs kiss*). Fans of Nina and Matthias from Bardugo’s Six of Crows duology will find something to like here: Évike is like a slightly more sardonic version of Nina, and Gáspár (like Matthias) is a brooding and pious man utterly whipped for a girl who defies everything he’s grown up with.

As a love interest and as a character, I am extremely fond of my one-eyed cinnamon roll Woodsman/prince, Gáspár. Did I think he was entirely too pure and kind for his own good? Yes. Did I find him flushing at Évike’s saucier taunts very pleasing and adorable? Also yes. In my head, he’s a bit like Adam Driver/has those vibes that people call ‘Adam Driver vibes’: looks intimidating (he has one eye and for some reason I imagined him as quite broad, like a bear), but is actually very soft and kind and even a little shy. Give me more big and intimidating love interests with hearts of gold please, publishing!

Religion within The Wolf and the Woodsman

Now, moving onto the threads of real-life influence woven into this book. The Wolf and The Woodsman draws heavily from Hungarian lore when it comes to the creatures Évike and Gáspár encounter on their travels, as well as worldbuilding itself. I saw someone say the names in this book were too hard to pronounce – if you’re reading The Wolf and the Woodsman and that’s one of your primary thoughts, then I think you need to closely look at yourself and not the book.

Religion is a key feature in The Wolf and The Woodsman; one central tenet of the book displays how different faiths exist, but also how they evolve and are used to often invalidate others, even when different faiths are just as equal. The Patrifaith, the dominant faith within The Wolf and the Woodsman, leads its practitioners to believe that other faiths (i.e. the pagan faiths and the Yehuli faiths) are wrong and need to be eradicated. In truth, all of the faiths within the novel are more similar at their core than dissimilar, especially when it comes to the ways followers of each faith invoke their magic.

Reid’s exploration of how faith is used as a weapon to build a nation (and destroy smaller, individual communities) is both fascinating and nuanced. At one point, Reid discusses the evolution of faith into religion — the Patrifaith, according to in-world lore, was once a cult dedicated to a sea god and it evolved as it made its way north. In the novel, many deny these more humble origins of the grand and mighty religion — but all faith comes from somewhere. Similarly, The Wolf and The Woodsman looks at the power of stories and how they too are used to establish faith, often being twisted into a form of propaganda that suits a certain kind of ideology.

In The Wolf and the Woodsman, the Yehuli are a Jewish-coded group. Évike’s father is Yehuli, and when Évike tentatively enters their community and begins to learn about this new part of her heritage . . . there is so much love and care written into the pages where Évike is learning their traditions and stories. Reid writes with such tenderness here – but is also brutally honest and displays how the Yehuli, like the Jewish community, have been treated as lesser because of their different faith and beliefs. Again, there is so much nuance here, so much unsaid but shown, underlying all the Yehuli scenes in the book. It’s something that I can’t tell you about; you have to read it.

To wrap this review up, I’ll briefly touch on Ava Reid’s writing style. It is beautiful, full of rich similes. It’s not overly florid of the kind that makes your head hurt . . . but on the flip side, there are a lot of similes. Someone’s bald head shining like a fresh pearl; tulips strewn across the flagstones like pale-bellied carp washed up on a beach; and so on. I love visually rich books that are heavy on description, but here there were points where it felt as if it tipped into a bit too much. And yet . . . Reid never seemed to use the same simile twice, which is incredibly impressive.

Frankly, The Wolf and the Wolfsman does have one of the most beautiful and impactful first lines I’ve seen in a long time (you can see it up top!) and it sets such an evocative atmosphere, so I’m going to overlook the similes and focus on the fact that Reid’s writing style is very very lovely.

To finish off, let me share this gorgeous art of Évike and Gáspár – illustrated by rudebeetle as part of TWATW’s signed preorder campaign. Is beautiful, I am obsessed, hope this is better than my entire review at convincing you, dear reader, to pick up The Wolf and The Woodsman.

Content warnings: Antisemitism; gore; genocide & ethnic cleansing. This list is not conclusive. Please use caution if you think you may be affected by any of these things.

TL;DR: A beautifully written tale that weaves Hungarian history with Jewish mythology, The Wolf and The Woodsman is at once romantic, thoughtful, and nuanced.

The Bear & The Nightingale by Katherine Arden

For the Wolf by Hannah Whitten

Writing sapphic romance & archenemies in contemporary YA, Not My Problem | Q&A with Ciara Smyth