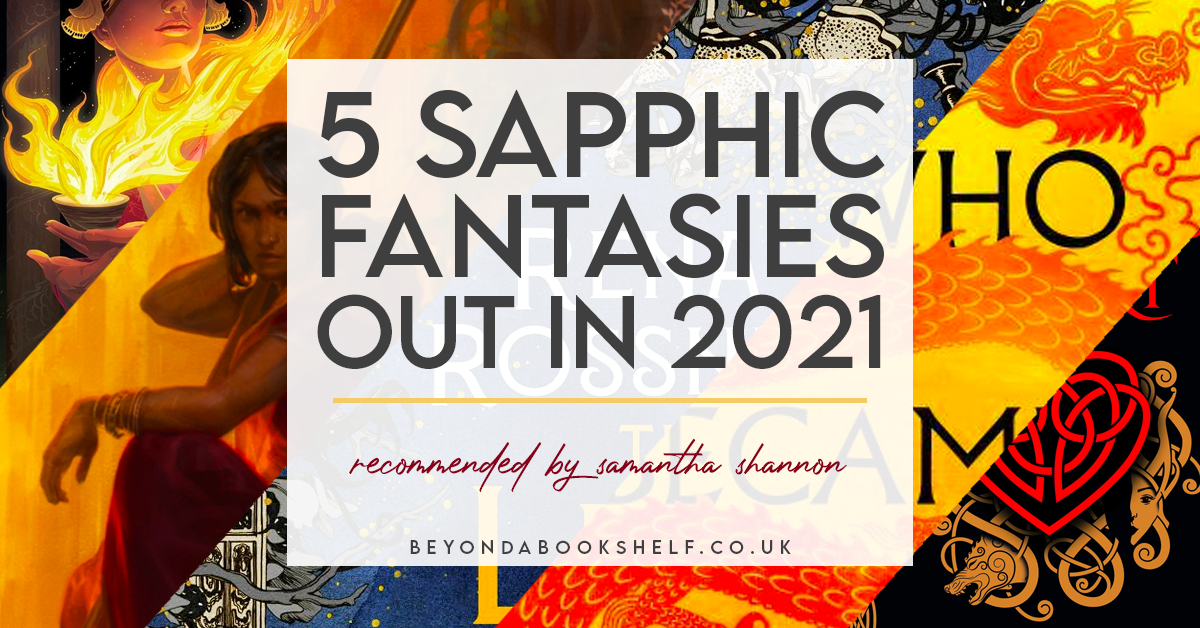 Happy weekend! It’s another F/F Friday! In case you missed our announcement, over the course of F/F February 2021 we collaborated with fellow bloggers, authors and creators to provide sapphic guest content, recommendations and interviews throughout the month. We loved doing this so much (and also we’ve still got content left over from F/F February) that we’re starting this semi-regular feature to share F/F content throughout the whole year.

And as usual, if you’re in the market for a new sapphic read we have a masterlist of almost 200 books that feature WLW characters and F/F relationships that we update as consistently as we can.

Samantha Shannon is the bestselling author of both my favourite book of all time and my favourite series. Both The Priory of the Orange Tree and The Bone Season septology hold a special place in my heart, and Samantha has become a good friend of the blog. From the very first year of F/F February, Samantha has supported our work, taken part in the readalong and generally promoted it and us. We are so grateful for her encouragement and also for writing this post for us (especially when she was very busy and on deadline).

Here, Samantha recommends five sapphic fantasies that she is anticipating this year. Some of which have now been released, but were not when this was written. We hope you enjoy!

Around 2017, while I was working on my standalone fantasy The Priory of the Orange Tree – a love story between a mage and a queen, both women – I finally had the revelation that I wasn’t straight. Even if I don’t haven’t yet found a word that captures every thread of the tapestry that is my sexuality, sapphic is one I’ve started to embrace in recent weeks, alongside queer. Since I came out, I’ve been soaking up sapphic fiction like it’s sunlight, putting as many books as I can on my to-read list, building myself a library that I just didn’t have when I was younger.

Although queer stories are still greatly outnumbered by books focused on cishet characters, there is now a treasure trove of rainbow reads, each a potential mirror for its readers, and each year, it grows bigger. I’d love to share my excitement for some of this year’s additions, specifically in my own genre – so, without further ado, here are my five most anticipated sapphic fantasy books of 2021.

Anyone who follows me should know that I am a huge fan of Aliette de Bodard’s In the Vanishers’ Palace, which re-imagines Beauty and the Beast as a sapphic, post-apocalyptic romance between Yên – a failed scholar – and a stern, shapeshifting dragon named Vu Côn, who trails luminous words in her wake. It’s set after the disappearance of the aptly named Vanishers, who devastated the world before leaving it altogether. Aliette conjures an enormous world and condenses it into a perfect jewel of a novella, which captivated me with its dark setting and surreal, dreamlike atmosphere.

Fireheart Tiger is her next sapphic novella, inspired by pre-colonial Vietnam, which follows Thanh, a thoughtful princess who is serving as a diplomat in powerful Ephteria, where she was held hostage as a child. Her new role thrusts her into the path of her first love, Eldris, who wants romance from Thanh – and more from her country. Fireheart Tiger apparently includes a sapphic love triangle, which I don’t think I’ve ever seen before. I already know I’m going to love this one as much as I loved In the Vanishers’ Palace.

Fireheart Tiger was released in February 2021 and is now available. We also hosted Aliette earlier in F/F February where she answered some questions about Fireheart Tiger and In the Vanisher’s Palace.

The Jasmine Throne by Tasha Suri

I fell in love with Tasha Suri’s debut when I read it a few years ago and recommend it at every possible opportunity, so here I am, recommending it again. Empire of Sand is a unique and stunning fantasy, with a magic system based on dance and a world dreamed into being by enslaved gods, based on Mughal India. Its slow-burn romance was beautifully executed. You can imagine my anticipation when Tasha revealed that she had sold a sapphic novel, first in an epic fantasy trilogy inspired by the history and epics of India.

The Jasmine Throne tells the story of Malini, a princess trapped by her cruel brother in an ancient, decaying temple. Her maidservant, Priya, is hiding a dangerous secret – and when Malini discovers it, their destinies become entangled. Tasha has said that this book features ‘morally grey lesbians (in love), reluctant-allies-to-lovers, vicious family dynamics, and monstrous women’ – be still, my queer heart.

The Light of the Midnight Stars by Rena Rossner

In recent months, I’ve read two remarkable fantasies rooted in Hungarian myth and history. The first was The Forest of Ghosts and Bones by Lisa Lueddecke – a quest to a haunted castle encircled by poison rain – and the second, which I finished a few days ago, was The Wolf and the Woodsman by Ava Reid, a folkloric and poignant tale of a young woman sacrificed to a tyrannical king, who finds the will to survive against impossible odds. After loving both of those books, I was thrilled to find out that another Hungarian-inspired fantasy, The Light of the Midnight Stars by Rena Rossner, would be out in April 2021 – and even more thrilled to hear that it’s sapphic.

The Light of the Midnight Stars begins deep in the Hungarian woods, where the descendants of King Solomon pray, sing, and perform small miracles beneath the stars. When a fateful decision to help an outsider ends in accusations of witchcraft, Rabbi Isaac and his three daughters are forced to flee their village, abandon their magic, and settle into a new life – but a dark fog is making its way across Europe, and sooner or later, it will reach even those who thought they could run from it. This book has been described as ‘an evocative combination of fantasy, history, and Jewish mythology’ and apparently includes a girl falling in love with a star. (As a lifelong astrophile myself, I can’t wait.) I’m looking forward to returning to Eastern Europe with this book, and to seeing where the sapphic element comes in.

The Light of the Midnight Stars was released in April 2021 and is now available.

She Who Became the Sun by Shelley Parker-Chan

I always love a good standalone, and this one sounds incredible. Set in China in 1345, during a harsh period of Mongol rule, She Who Became the Sun by Shelley Parker-Chan centres on an iron-willed peasant girl, a second-born daughter destined for nothing, who steals her brother’s identity and becomes a monk, eventually rising to lead the rebellion against China’s Mongol rulers. It’s been pitched as Mulan meets The Song of Achilles, and Shelley Parker-Chan describes it as sapphic, achillean and genderqueer.

I’m fascinated by Chinese history, particularly its conquest dynasties, so to see a queer book set during the twilight of the Yuan Dynasty is such a treat. I’m very fortunate to have been sent an early digital copy of She Who Became the Sun – I’m going to dive into it as soon as I can.

The Witch’s Heart by Genevieve Gornichec

Something I’ve appreciated in recent years is the outpouring of books that lift historical and mythological women from the shadows – books that give voice to those who were vilified, erased, or pushed to the margins, and books that construct narratives for women we know almost nothing about, filling the gaps and silences that riddle the past. One of the main reasons I wrote The Priory of the Orange Tree was to give more complex roles and agency to the princess Cleodolinda (also known as Sabra) and the enchantress Kalyb – the two women that appear in the legend of Saint George and the Dragon, whose names and roles have been reduced over time.

Some recent examples of books in this vein are The Mercies and The Deathless Girls by Kiran Millwood Hargrave, about the seventeenth-century Vardø witch trials and the Brides of Dracula respectively (both sapphic), Hild by Nicola Griffith (also sapphic), A Curse of Roses by Diana Pinguicha (also sapphic) and Burial Rites by Hannah Kent. I’m passionate about putting women at the heart of their own stories – so when I received a proof of The Witch’s Heart by Genevieve Gornichec, I couldn’t believe my luck. This debut fantasy tells the story of the jǫtunn Angrboða, mother of the trickster god Loki’s three monstrous children: Jǫrmungandr, Fenrir and Hel. I’ve been doing a lot of research on Norse mythology for my current project, but I’ve ever read a fantasy that draws from it – I’m excited to discover more about Angrboða, and how Genevieve Gornichec will enrich her story.

The Witch’s Heart was released in May 2021 and is now available. Ellie was lucky enough to get an advanced copy and you can find her review here.

Samantha Shannon is the author of the internationally bestselling Bone Season series and the epic fantasy The Priory of the Orange Tree. She studied English Language and Literature at St. Anne’s College, Oxford and her work has been translated into twenty-six languages. She lives in London.

The Priory of the Orange Tree

Check it out
Bookshop.org*
Imi’s review

Check it out
Bookshop.org*

In The Ravenous Dark by A.M. Strickland | Book review

Writing sapphic romance & archenemies in contemporary YA, Not My Problem | Q&A with Ciara Smyth