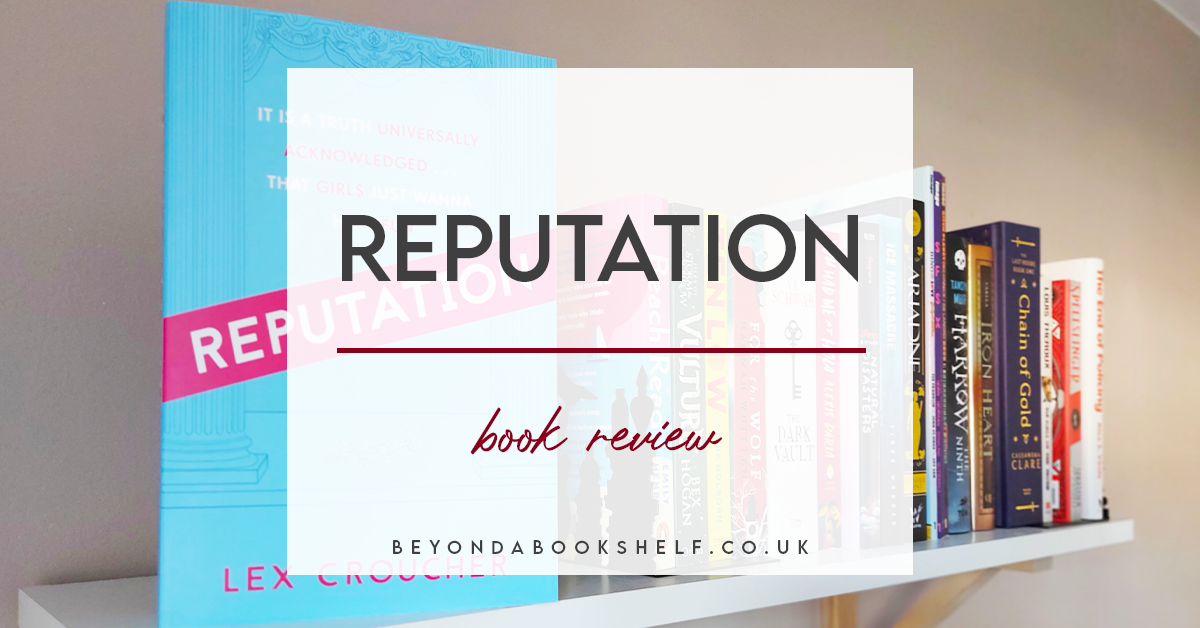 Abandoned by her parents, middle-class Georgiana Ellers has moved to a new town to live with her dreary aunt and uncle. At a particularly dull party, she meets the enigmatic Frances Campbell, a wealthy member of the in-crowd who lives a life Georgiana couldn’t have imagined in her wildest dreams.

Lonely and vulnerable, Georgiana falls in with Frances and her unfathomably rich, deeply improper friends. Georgiana is introduced to a new world: drunken debauchery, mysterious young men with strangely arresting hands, and the upper echelons of Regency society.

I received an uncorrected proof copy for free from the publisher or author in exchange for an honest review.
Any quotes used in this review are subject to change upon release.

Reputation is a book that I have been so hyped for since my attention landed firmly on romance last year, and my fall down the Tessa Dare and Julia Quinn rabbit hole into historical romances. This, combined with the Gossip Girl-meets-Mean Girls comparisons meant that I was so excited to get my hands on this one, and truly honoured to be part of the blog tour.

There, you see, lies the issue. I was too excited and was sorely disappointed to find this (quite hefty) 400-pager a sort of rambling mess? A little disclaimer before I get into it – I did pre-inform Zaffre that my blog tour review would be leaning on the negative side and they still wanted me to take part, and I’m here to give my honest thoughts and honestly, this was not the one.

I buddy read this with dear pals Gabbie and Kirsty, and thankfully we all felt the same way – the majority of the book dragged, leaving us reluctant to pick it up but also, because the characters had the car crash vibe (horrifying actions, but you can’t look away), it was quite a quick read when you get into the rhythm.

The book is (sort of aptly) the equivalent of a drunken stumble through a rather messy party: you get a few steps right and have some fun along the way, but you meander about a bit too much and by the end of the night, you’re wondering if it had been worth coming in the first place.

Besides Georgiana and maybe somewhat Frances and Thomas, I could tell you so very little about these characters. I couldn’t attempt to describe them physically, nor any of their history or motivations. The characterisation was lacklustre at best, and I would argue that there are probably too many characters taking up space and that is the problem.

Cecily, Jane, and Jonathan feature heavily but are so flimsy characteristically that they serve no purpose beyond showing that Frances is popular. Did Cecily need to exist at all?

I would argue that Reputation has no through-plot, and then so many side plots to try and fill the pages that just leaves the reader unfulfilled in so many ways. I couldn’t really tell you what the story arc is, because it’s not as simple as saying ‘Georgiana makes friends with high society trouble-makers and eventually falls in love’ because if you go in thinking that, you’ll be disappointed by the lack of romance. I would even struggle to categorise the book as a romance, because that part is so much of a side plot that it’s not really important (but, in my opinion, the only good bit).

Good God, that was so much worse. She couldn’t call him ‘Thomas’, as if they were already ten years married. She might as well send him a nude portrait of herself and be done with it.

This all leaves you to think that this book is character-driven rather than plot-driven, but as I’ve already said, the characters are all two dimensional. Sure, Georgiana learns a lot and has her own growth as a person, but despite being the protagonist, I’m not sure I really even know that much about her…

There’s also a rather questionable domestic abuse moment surrounding Frances’ parents. I’m calling it a moment and not a plot because it comes up ONE TIME and is never mentioned again. Basically, her dad is unhappy because his wife (who is Black) is embarrassing him as a white upper-class man and you’re led to believe that they frequently argue and he abuses her in some way. Because of this moment, we see Frances as vulnerable and it’s supposedly a reason she is how she is… but that’s it. That’s the only purpose of this one horrible scene and racist commentary. Just not sure it was needed…

As I’ve written this review, I’ve started to question whether 3.5 stars is an accurate rating, because I certainly have more complaints than compliments. However, the final six chapters are truly such a highlight that I just wish the rest of the book had been worth it.

Handsome, wealthy, kind young men aren’t that easy to come by. Especially not ones who are . . . good with their hands.

However, as it’s the very end of the book, I feel like so much of it is spoilers even though it kind of shouldn’t be… If you want to know what I mean and don’t mind some slight spoilers, look below!

So, as the end gets closer, the antagonist of the story really makes themselves known which builds up to Georgiana’s big lightbulb moment. This moment is one page that really clicked for me as to what the book is trying to say, what it’s about. However, this page is 379 out of 425; I should have got there before now.

Both George and Frances are victims sexual assault and / or rape in the book and this moment is George’s realisation that what happened was not her fault, but that she can do something to try and stop it happening to another woman. As a rape survivor who actually recently confronted their rapist, this moment was really powerful, and is probably the main source of all the stars I gave the book. However, because it kind of came out of nowhere and is so near the end, is it as powerful as it could have been? I don’t know.

Perhaps Georgiana could tell, and still keep some piece of herself intact. Even if she was labelled a harlot, a liar – even if half the county took his side – perhaps it was worth it to sow the seed of doubt; perhaps ladies would keep their distance, parents think twice about leaving their daughters in [his] company.

I feel like I need to clarify that the book was not bad. It was fine, but nothing deep and meaningful (despite there being an abundance of deep and meaningful things it could have been). Really, I think I’m just disappointed because I had such high hopes.

Content warnings: Drinking; drug use; grief; domestic abuse; sexual assault; off-page rape; mentions of homophobia and racism. This list is not conclusive. Please use caution if you think you may be affected by any of these things.

TL;DR: Croucher’s Reputation seems to miss its mark and leave the reader wishing it had just a little bit more direction and purpose. The last six chapters show what could have been, but is the previous 300 pages worth it?

The It Girl by Cecily von Ziegesar